The History of The League of Women Voters 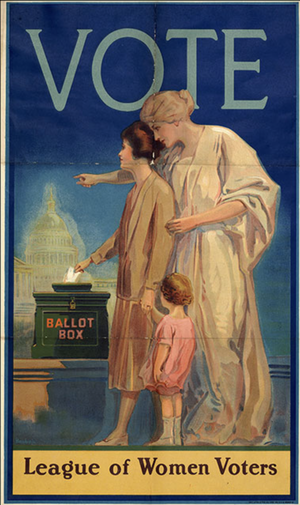 When the League of Women Voters (LWV) was founded, one of its primary goals was to provide civic education to women as they won the right to vote.  The founders knew that to participate effectively in a democracy required that citizens be well informed about how government works and how policy was established.  As a grassroots organization, believing that the party system was open to manipulation, the League focused on policy - not party- as a way to direct their political activism.  LWV put their energy in educating themselves on the issues of the day and came to consensus on a variety of issues that they felt were important Positions to support,  among them: open and transparent government, voting rights and women’s rights, campaign finance reform, universal health care, abortion rights, climate change action and environmental regulation, and gun control.  That same process continues today.
​
The League was founded in 1920 to support the new women suffrage rights and was a merger of National Council of Women Voters, founded by Emma Smith DeVoe, and National American Woman Suffrage Association, led by Carrie Chapman Catt, approximately six months before the Nineteenth Amendment to the United States Constitution gave women the right to vote.

The League of Women Voters began as a "mighty political experiment". Originally, only women could join the league; but in 1973 the charter was modified to include men. LWV operates at the local, state, and national level, with over 1,000 local and 50 state leagues, and one territory league in the U.S. Virgin Islands.

The History of The League of Women Voters Whidbey Island

The League of Women Voters Whidbey Island started as a small but mighty group of eighteen in 1976.  Carroll Young, who is still a current member, saw a need for a nonpartisan organization in an otherwise polarized Whidbey Island.  Since the beginning, we’ve worked hard on the Island to be responsible, and our organization is respected - League members have been asked to serve on everything from environmental committees to art commissions.  We have upheld strict non-partisan campaign rules for our members - and some League members have left their roles in League Leadership to serve as campaign managers or run for public office.

As early as 1977, we were featured in Whidbey News articles as the folks who ran (and still do) the best public forums, both on policies, ballot issues, and candidates.  Our forums make front page news, thanks to our varying formats, and nonpartisan conduct. Our League Members have presented candidates running for positions as varied as U.S. Congress to cemetery commissioners.  That same year we had over 200 attend our meeting on Island Water Resources with a speaker from the U.S. Geological Survey comparing Whidbey’s water problems with Long Island, New York.  In 1978 we started studying and holding public forums concerning Growth Management and Land Development.  We had League members on the county and local boards pertaining to our growth management needs.  Our local League testified in 1981 for our LWV supported zoning and enforcement laws.  We had great input and impact on the policies of growth in our county.

We yearly take on a local study issue, a state study, and a national study, delving into such diverse topics as: clean air, water quality, death with dignity, Washington State tax policies, protecting fish runs in our state rivers and shores, radioactive waste, education, women issues, and some of our studies have been visited more than once!  We formed a United Nations study group in 1977, and it has emerged as our Great Decisions groups today.

We started studying the health care situation of America when Booth Gardner was Governor.  We’ve continued for over thirty years holding panel discussions on health care to over-flowing audiences in Coupeville and Oak Harbor.  We’ve had speakers like Dennis Braddock, Chair of the House Health Care commission, Canadian doctors, our own members in the nursing profession, and our recent viewing of a documentary film of the Health Care in US/Canada.

Besides forums and study groups, LWV has had an impact in a variety of ways in the past 4 decades.
-In 1987 there was an issue with local “electioneering” at the Polls on Whidbey.  Our League was respected and called first to investigate.
-We were instrumental in a State Supreme court case regarding election funding.
-Under the guidance of Trudy Sundberg, in 1991 we brought forth a lawsuit against Island County over enforcement of the Public Water System Coordination Act.
-In 1993 our League became the prime sponsor of  trudy Save Our Kids, an organization that held public forums bringing together educators, court judges, police departments, and citizens concerned about the problems our youth face.
-Our Whidbey Island Leaguers stood with clip board in hand and huge maps in our folders, registering hundreds if not thousands of new Island County voters.  We did this in front of every Island grocery store, ferry dock, at every Island festival, in the high schools, at the College, and at the Navy exchange and base meetings for years.
​
Every organization has its pillars.  The Whidbey League has had some dandy ones though the years:
Harriet and Harlow Hayes, Bettie Fruend, Dorothy Cleveland, Sally Pottle, Trudy Sundberg, Dorothea Jones, Phyllis Blood, Gerry Mathis, just to name a few. We’ve always had male members and active ones at that.  John Shanefelt was a founding member, and let's remember Steve Johnson, who increased our League membership to over 100!  And now we hav had e a male co-president, Marshall Goldberg.

We are proud to continue the woman suffrage movement that gave birth to the League of Women Voters.  We are an activist, grassroots organization whose leaders believed that women should play a critical role in advocacy.  And that holds true today as we continue to work on vital issues of concern to our members and the public.

Our Whidbey Island League has a long rich history that, with your help, will continue long into the future.
Thanks to Lois Repoz and Carroll Young, July 2014

View our Current Board